Babel, 2016, Genesis 11: 1-9 (the story of the Tower of Babel) translated using Google Translate through the official languages of the 12 countries in the world with the highest number of Christians; Inkjet prints on photo paper, In 11 parts, each 20.5 x 35.5 cm, Edition of 10 plus 2 APs 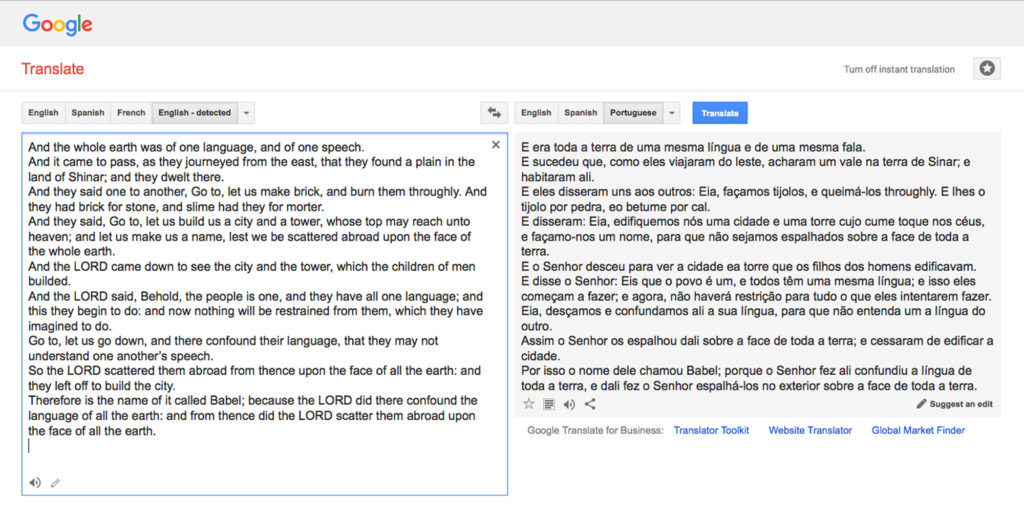 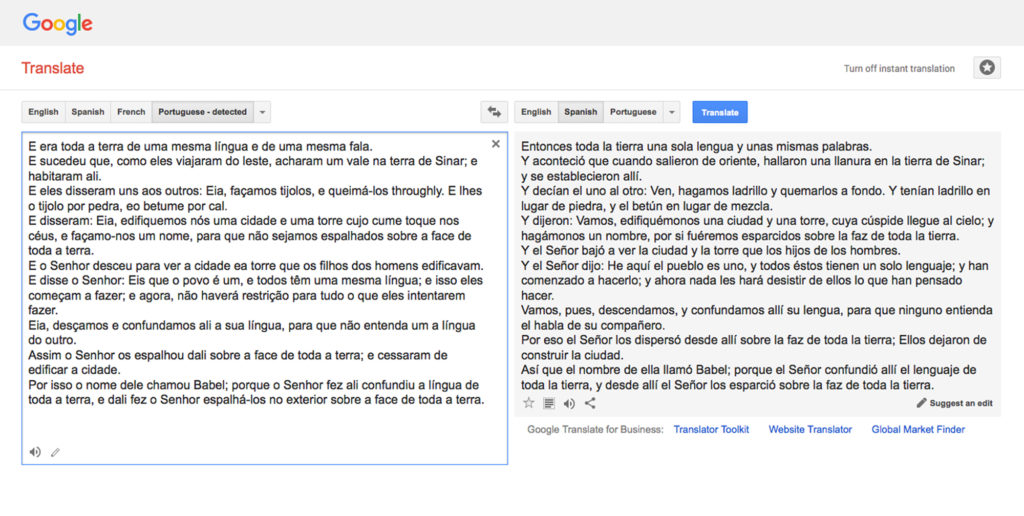 For this project I have taken the story of the Tower of Babel (Genesis 11:1-9) and translated it using Google Translate through the official languages of the 12 countries in the world with the highest number of Christians.

The following is the story of the Tower of Babel (Genesis 11:1-9) according to the Holy Bible: King James Version.

And the whole earth was of one language, and of one speech.
And it came to pass, as they journeyed from the east, that they found a plain in the land of Shinar; and they dwelt there.
And they said one to another, Go to, let us make brick, and burn them throughly. And they had brick for stone, and slime had they for morter.
And they said, Go to, let us build us a city and a tower, whose top may reach unto heaven; and let us make us a name, lest we be scattered abroad upon the face of the whole earth.
And the LORD came down to see the city and the tower, which the children of men builded.
And the LORD said, Behold, the people is one, and they have all one language; and this they begin to do: and now nothing will be restrained from them, which they have imagined to do.
Go to, let us go down, and there confound their language, that they may not understand one another’s speech.
So the LORD scattered them abroad from thence upon the face of all the earth: and they left off to build the city.
Therefore is the name of it called Babel; because the LORD did there confound the language of all the earth: and from thence did the LORD scatter them abroad upon the face of all the earth. 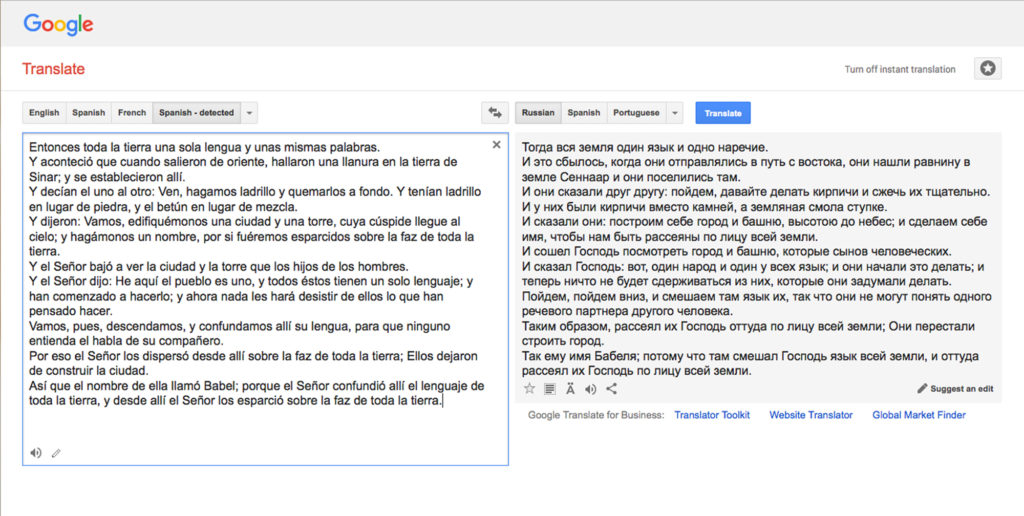 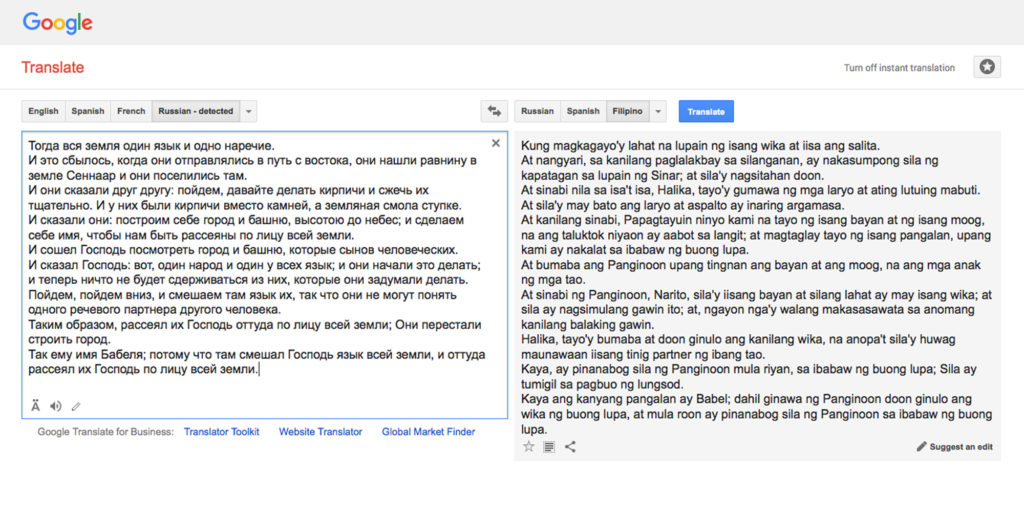 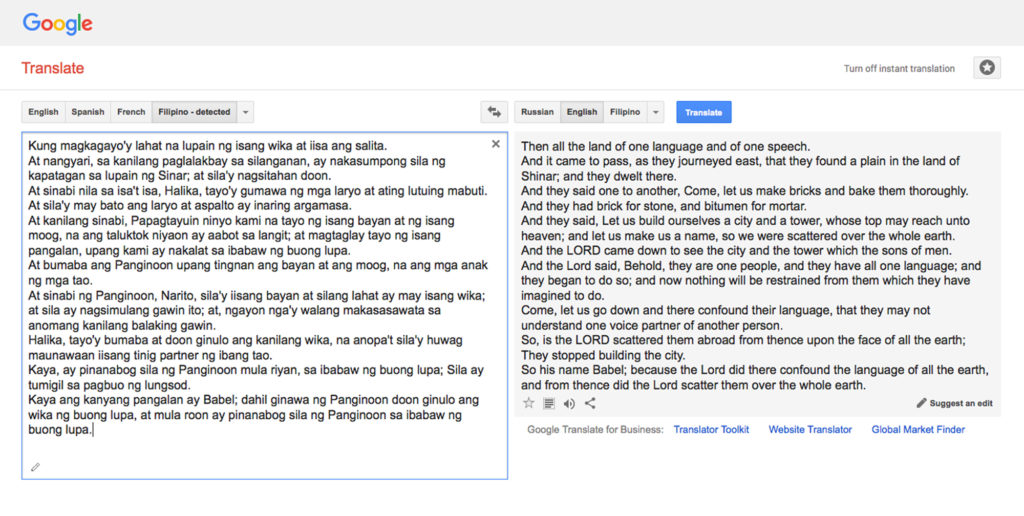 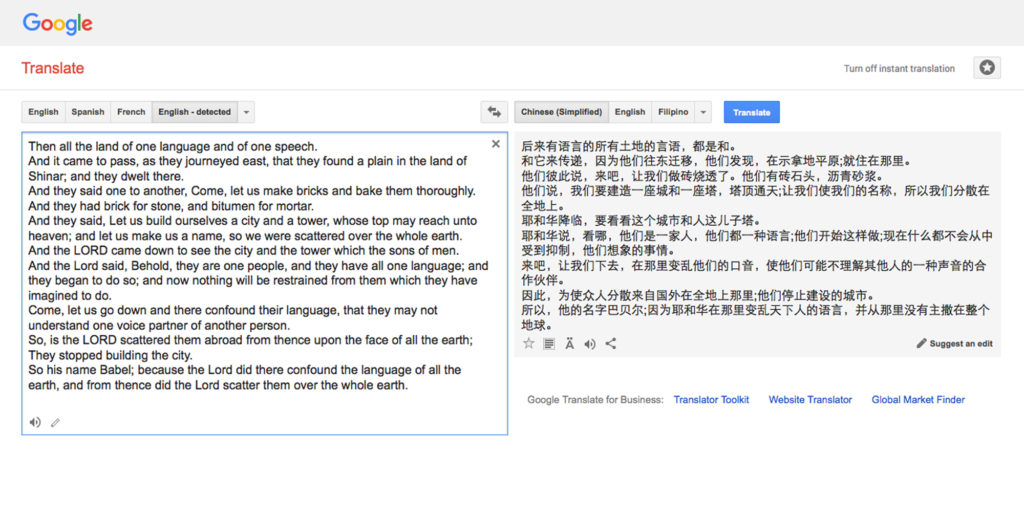 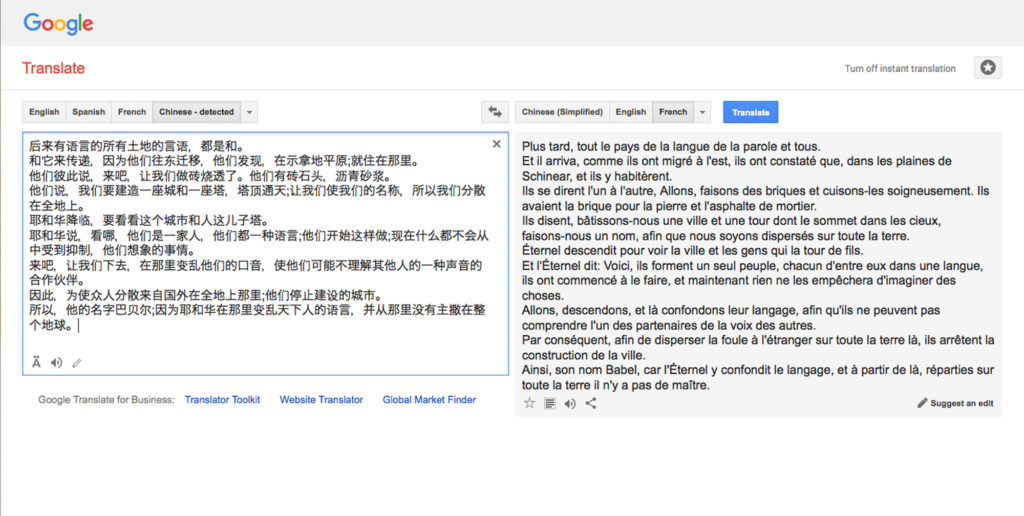 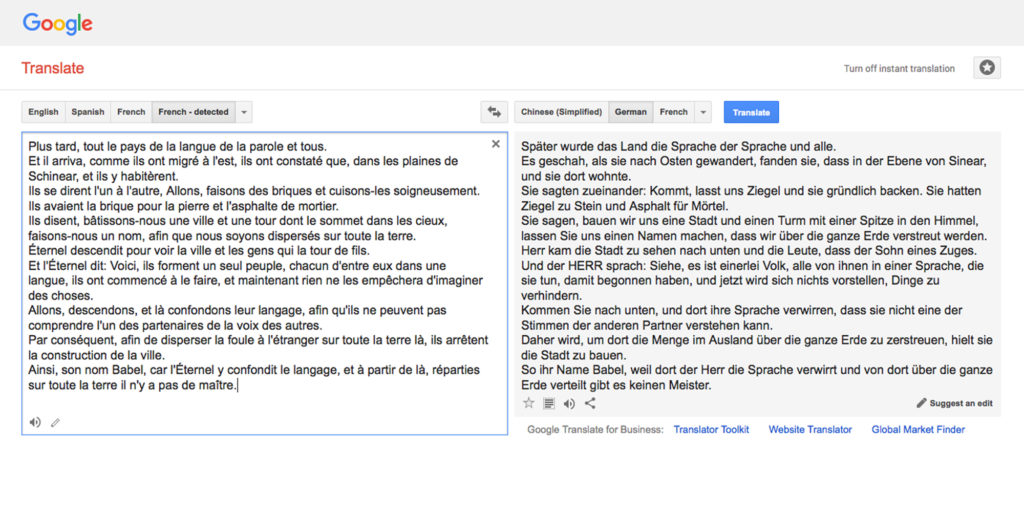 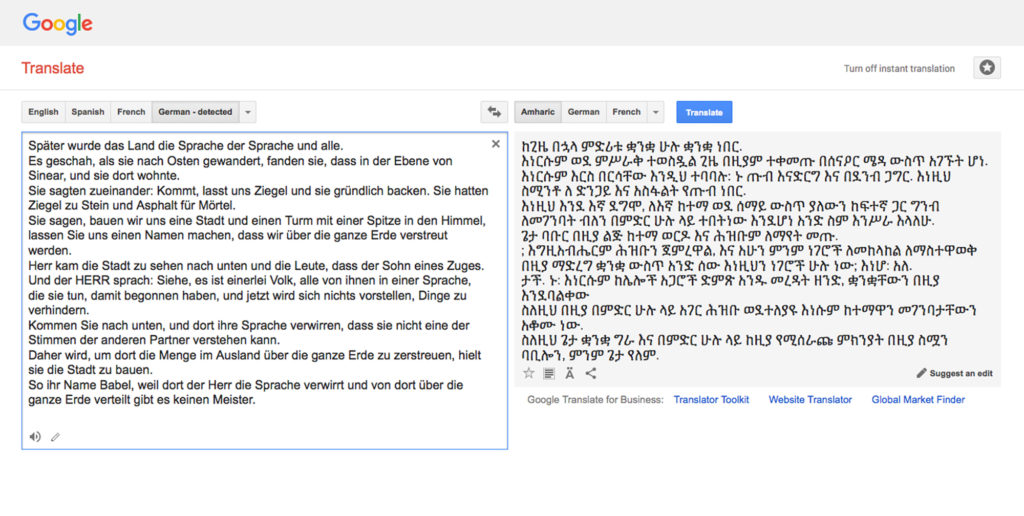 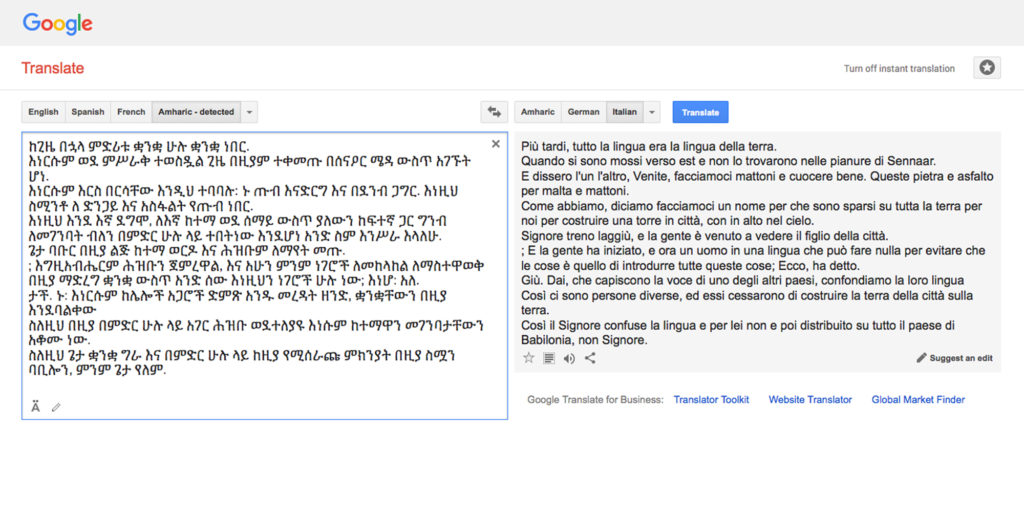 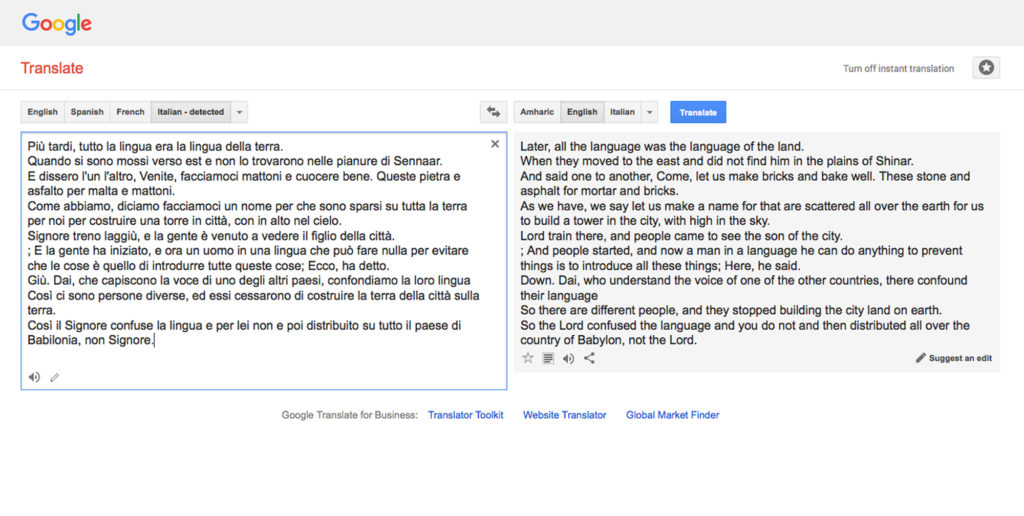 The story of the Tower of Babel can be interpreted in many ways, however, I was interested in the interpretation that God dispersed the people of this place and gave them different languages as a punishment for co-operating so much that there was nothing they could not achieve; that by being in one place and speaking in one language they had become a threat to God. The fact that in this story, at least in this interpretation of it, God disapproves of speaking the same language and co-operating seems incongruous with our contemporary interpretation of the problems in the world and how we might go about solving them.

There have been many recent technological advances aimed at helping us communicate better across languages that we do not speak, some of which work better than others. All of which however would be against God’s wishes if you interpreted this passage in a certain way.

For this project I have used Google Translate as a commonly used, although flawed tool to carry out these translations. As this software is not totally accurate this process obviously skews and distorts the text and changes the meaning as it goes from language to language. The original text was taken from the King James Version of the Holy Bible. This is the most popular translation of the Holy Bible used in the United States of America – the country in the world with the most number of Christians. According to the data that I have found, after the USA the next eleven countries with the most number of Christians are Brazil, Mexico, Russia, the Philippines, Nigeria, China, the Democratic Republic of the Congo, Germany, Ethiopia, Italy and the United Kingdom.

The Bible in the beginning was obviously not written in English and has been translated and copied out many many times since it was written. In my project you can see the changes the text undergoes as it is translated through the different languages. This can be seen to mirror the many hidden translations this text has already undergone before it was published, and to highlight the fact that what you are currently faced with as the original may be similarly flawed due to centuries of editing, translation and interpretation.

This translation was recorded on 23rd June 2016 so this work also provides a snapshot of Google’s translation algorithms at this time.